skip to main | skip to sidebar

All of the following recipes from from Chefe Silva in Sabores de Portugal (Tastes of Portugal) which was published in 2007 by Texto Editores. There are ten different regions of Portugal represented in the recipe book, but we weren't able to visit them all at once! 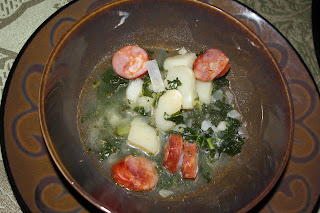 Peel and chop the potatoes, the garlic and the onion and bring them to the boil in a litre of water with the meat; season with a little salt. Simmer in a pan with the lid on. After cooking, take out the meat and strain through a colander (not sure this step is necessary!). Bring this to a boil again and add the kale; let simmer for about 25 minutes. Check the salt level and add the olive oil. Serve garnished with chorizo or smoked ham, either as an aside [sic] or cut into pieces and added to the soup and slices of bread (recipe follows).

Break the eggs in into an overproof bowl and add the sugar, baker's yeast and salt and crumble everything by hand. Heat the mixture for a short while. At the same time, boil the olive oil, lard, butter and honey. Place the flour and cinnamon with a trough in the middl 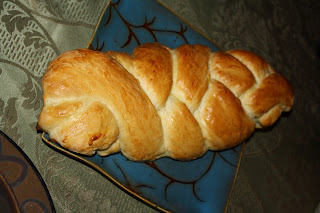 e. Empty the hot eggs into the space and mix by hand. Then gradually add the hot fat (keeping a little for rolling out) and kneed as if making bread. When the misture has the consistency of bread dough, it is ready. Let it rise, covered with a towel and a blanket for five or six hours (check the dough so it doesn't overflow the container). After letting it rise, take small pieces of the dough and either braid together (as we did) or shape into rolls. Let stand and then bake in a moderately heated oven (300 Fahrenheit) for about 30-40 minutes.

Wash the potatoes, put them on a tray with a lot of rock salt, bake them at 350 Fahrenheit for about 40 mins. Take them out, shake off the salt and press them lightly. Meanwhile, charcoal grill the salted cod and place it on a serving dish with the potatoes. Cut the garlic into rings and fry them lightly in the olive oil and put them over the fish and potatoes. Garnish with raw onion rings and black olives. The note at the bottom of the page also reads: Bacalhau is salted cod and is considered one of the most characteristic foods in Portugese cuisine. It is said there are 365 different ways of cooking it. 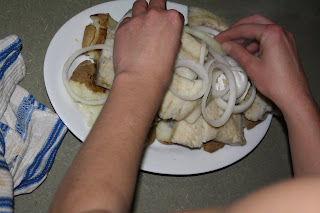 Cut the rabbit into pieces and season with salt; fry it in hot lard and then drain it. In the fat which has remained, add the olive oil and the butter, the garlic and the chopped onions and stir until they start to brown; add the cleaned and chopped vegetable, the chili paste and the rabbit; add water to cover all the ingredients and season with a little salt; bring to a boil and cook. Remove the pieces of rabbit and puree the rest in a blender; season to taste. Cut the bacon into small pieces and fry it in lard. Serve the rabbit with the sauce poured over it and the slices of bacon (and bread if you so choose). Make a fried rice, according to your taste, to serve the dish.

Clean and wash the octopus (or squid) carefully and cut it into pieces; add the olive oil to a pan and add the crushed garlic, onion and bay leaf; fry until slightly brown. Add the octopus (or squid), the tomato, the clove and glass of wine. Do not add salt. Cover and let it cook over a moderate heat; keep on adding a small quantities of wine as required, but in such a way that the final sauce is suffienciently well-flavoured. Then season with salt and hot sauce, to taste, and serve, along with boiled potatoes or white rice. 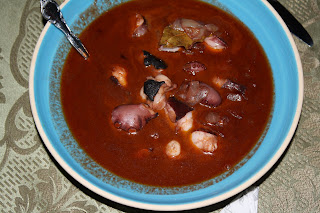